Southeast Asian countries have achieved their rapid economic development recently. ASEAN’s GDP will reach US$4.7 trillion in 2020[1] with more than 650 million population. By 2030 ASEAN economy is predicted to eclipsed Japan’s, and be the fourth largest single market after the EU, US, and China[2].

There are two options to achieve more GDP per capita: 1) increasing urbanization, and 2) to decrease agricultural sector (and increasing more service or industrial sector). Degree of openness of economy might help boosting more economic activity but will not affect to directly impact to increase GDP per capita.

Such increasing of GDP per capita will generate more middleclass in the country, and will inevitably affect to political order in each country in Southeast Asia. 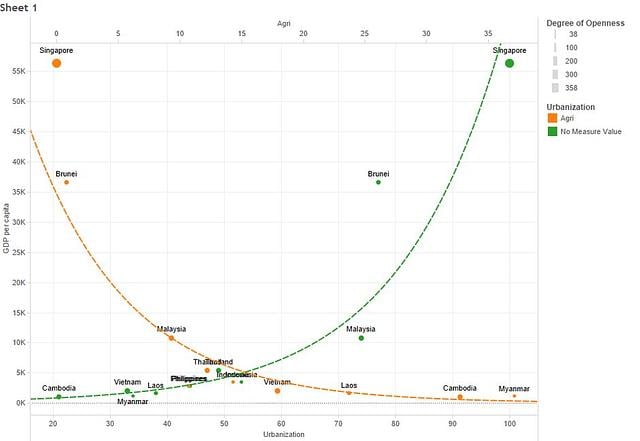 According to the graph, the orange graph is agricultural sector size (upper axis), while the green graph is urbanization size (lower axis). Although, Thailand can struggle out from the threshold (at around $US 5,000 GDP per capita), but it seems she has faced with “transitioning” trap and can progress with very little advancement. Indonesia might easily capture such level of development and can getting out the threshold, if she can manage proper development policy and can neutralize internal political tension.

Nations will adopt a conservative ideology as their shield to protect the by-product of economic development (universal value such as freedom of expression and human rights) that leads to more and more repression and conflict. To preserve the benefits of an elite club and maintain social order, the superclass will maintain the existing taboos they have protecting them from public criticism and debate, especially on the issues like lèse majesté in Thailand, racial policy in Malaysia, and communist party hegemony in Vietnam. There will be both political machinery and legal measures employed to bar citizens in the country from criticizing these topics. Because of an incompatibility with universal freedom of expression, they will censor outside criticism by creating internet firewalls like in China. If any citizen violates these rules, they will be imprisoned. Conservative force dominates social policy. There will be more imposition of strict censorship, political mechanisms, and public humiliation. This will lead to more violence both inside each country and between the countries.[4]

Since Singapore, Malaysia, and Thailand are the top three most developed economies according to GDP per capita, we will observe the interrelationship between economic development and impact on cultural issue and political order as the prime example of ASEAN.

We can observe "paradox of modernity" from Francis Fukuyama's idea in his famous book, "The End of History and the Last Man". Fukuyama follow Hegel's idea, which he has been inherited Alexandre Kojève's dialectic of human's struggle for getting better dignity from the others. This struggle will drive the change in the history, or as mentioned by Hegel, “History in general is therefore the development of Spirit in Time, as Nature is the development of the Idea is Space.”

On this sense, the "History" is an evolution of human's society causing from the struggle to get better dignity; this evolution will reflect at form of the government. In which, according to Fukuyama, liberal-democratic regime is the final form of human's government. The liberal-democratic regime has been the best form of government in term of ethics, politics and economy since French revolution. This type of government will perfectly acknowledge human dignity of the citizens within the society. There is no any other form of government that can provide better form of government than this. Hence, Fukuyama concluded, there is no more "History", it's the end of "History". Although, there will be more events in the history, but such events will not be recognized as "History" , because it will not lead to more higher evolution in the society.

After the end of cold war era (1947 - 1991), USSR had collapsed as well as the Berlin wall, Fukuyama's book had been published in 1992, it was a proven Fukuyama's thesis for the reason of ending of cold war.

Another part of Fukuyama's book has derived from Friedrich Nietzsche's idea of "The last man." At the end of "History", argued by Fukuyama, instead of producing the preferred human being as cited by Nietzsche's idea of Übermensch (the superman), it will provide "the last man" in the society. The last man will be the man who doesn't want to risk their life to pursue higher meaning of life, which, according to Nietzsche, is not the true human being. Fukuyama then pointed out the first paradox of modernity.

These civilizations will both confront and cooperation on each other because:

Huntington had developed his idea and published his paper in Foreign Affairs in 1993[5], and then publish his book, "Clash of Civilizations" in 1996. After 9/11 incident in 2001, he had been well known from the idea to explain the then current phenomenon of the conflict between the US and the al-Qaeda.

Therefore, the next paradox is the modernity will create more conflict rather than the peaceful society according to Huntington. And actually, democracy the product of modernity will also create another paradox, which is to build political equality (in term of law and political process), in the end you will produce the "bargaining among political and bureaucratic elites"

In principle, elite bargaining takes place within limits set through democratic institutions and processes. But these limits are often broad, popular participation and control are not always robust, and the political and bureaucratic elites posses great discretion. Despite the limits on popular control. Far from it. Periodic elections compel them to keep a ready eye on popular opinion. In addition, as they arrive at decisions the political and bureaucratic elites mutually influence and check one another. Elite bargaining has its own system of mutual checks and balances. To the extent that elected representatives participate in the bargaining process, they are a channel through which popular desires, goals, and values enter into governmental decisions. Political and bureaucratic elites in democratic countries are powerful, far more powerful than ordinary citizens cane; but they are not despots.[6]

Later, Fukuyama has developed his new book, "Political order and political decay" in trying to explain that the political institute may be decay and thus the source of the weakening of political system.

On observing top three most developed economies in ASEAN

We assume that once reaching to mature stage of socio-economic development of three top three Southeast Asian countries, Thailand, Malaysia, and Singapore, the paradox of modernity will intensify more conflict regarding the contradiction between the universal value and local identity in the society.

Other countries in the region will still enjoy economic growth dividend for a while. Cambodia, Myanmar, Laos and Vietnam (CMLV) will experience rapid socio-economic development similar to Thailand before 1997 financial crises from shifting of production supply chain from China as mentioned CMLV as member in Post China 16 emerging countries by Stratfor[7], such rapid socio-economic development in these countries will pacify internal political conflict for a while. However, Philippines and Indonesia's economic growth dividend may be depleted soon. It depends on the ruling class in both countries on how to manage sustainable growth and internal political tension properly. We will treat Brunei as a unique case due to her specific economic structure which heavily based on Petroleum and energy exporting sector, absolute monarchy regime, and rather small population at around 415,717 people[8].

Therefore we will observe Thailand, Malaysia, and Singapore first, as we expect paradox of modernity will intensify political conflict and political tectonic change in these three countries more than other countries in Southeast Asia.

In Thailand, the elites in the constitutional drafting committee right now, they have blind perception on "going more agricultural, going more rural area" (agricultural is Thailand's backbone; we are agriculture country; we need not to compete in global economy; just going back to self-sufficiency economy. etc. etc.) Thus, they will cease "decentralization" attempt in reality, although they will chant the "decentralization" rhetoric. The "real" constitution of this country will not allow real decentralization happens.   Moreover, contrasts from Malaysia, Thailand is a highly centralized country/government, everything have been pulled back into Bangkok. Actually, Thailand is a "self- colonizing" country. This pattern of development will create two sub-states within the kingdom, (1) Bangkok State and (2) non-Bangkok State. Bangkok sate, which sooner or later will engulf peripheral region into its territory, can compare to developed economy. But Non-bangkok State will never capture the same level of economic development. This is a root problem of political strife in Thailand.

In Malaysia, with the nature of decentralized state she will have no problem to achieve higher GDP per capita and becoming a developed country in 2020 as of planning. But, more urbanization will add more votes to the opposition, in which urban area is now their stronghold. Political strife will be also more intense there.

There will be a Citizen/Foreigner Divide in Singapore because of aging society effect and low birth rate, while Thailand and Malaysia can absorb this problem by illegal migrant workers. The degree of political strife in Singapore will increase political power to the opposition, albeit at a slow rate in this early stage.

Finally, it's up to the new generation in Thailand, Malaysia (and perhaps also Singapore), whether they can organize themselves and can capture political power in the respective country, and to reset the outdated policy from the former cold-war generation, heading the whole region to prepare for the new challenge in the coming decades.