[The news items (below) tell a story that may raise similar questions in Thailand. The questions are in the nut shell "How much multi-national and major national corporations in Thailand pay in taxes with respect to how much income they make in Thailand?" Perhaps a yardstick for fairness in paying taxes is by comparing with the applicable 'personal' income tax rate. It should not come as a surprise to anyone that presently these mega-corporations do not contribute as much taxws because they have 'tax minimization capacity and strategies'.]

Apple is among several companies appearing before the inquiry examining the adequacy of Australia's current tax laws, the work of the Australian Tax Office and whether more transparency is needed to deter profit shifting and tax avoidance.

The inquiry by the Senate Economics References Committee is scheduled to hear evidence from Google, Apple and Microsoft and mining corporations BHP Billiton, Rio Tinto and Fortescue Metals Group.

..."You have an international tax avoidance structure, and...it's a double Irish sandwich with Dutch associations," Senator Milne said to Mr King (from Apple).

"Now, let me ask you, what is a double Irish sandwich with Dutch affiliations?"

Mr King replied he had "no idea" what Senator Milne was talking about.

Mr King responded by saying all of Apple's revenue was recorded in the company's books in Australia...

..."We are not opposed to paying tax. What we're opposed to is being uncompetitive." (said) Google's Maile Carnegie...

In response, Senator Milne said compared to Australia, Singapore "just so happens" to be a low-tax jurisdiction....

[Explanation of some terminologies]
From Wikipedia:
"double Irish arrangement" is a tax avoidance strategy that some multinational corporations use to lower their corporate tax liability. The strategy uses payments between related entities in a corporate structure to shift income from a higher-tax country to a lower-tax country. It relies on the fact that Irish tax law does not include US transfer pricing rules.[1] Specifically, Ireland has territorial taxation, and hence does not levy taxes on income booked in subsidiaries of Irish companies that are outside the state.

The double Irish tax structure was pioneered in the late 1980s by companies such as Apple Inc., according to Charles Duhigg of the New York Times.


DEFINITION of 'Double Irish With A Dutch Sandwich' by
http://www.investopedia.com/terms/d/double-irish-w...

A tax avoidance technique employed by certain large corporations, involving the use of a combination of Irish and Dutch subsidiary companies to shift profits to low or no tax jurisdictions. The double Irish with a Dutch sandwich technique involves sending profits first through one Irish company, then to a Dutch company and finally to a second Irish company headquartered in a tax haven. This technique has allowed certain corporations to dramatically reduce their overall corporate tax rates.

no capital gains tax,
no gift tax,
no sales tax or value added tax,
no profit tax,
no inheritance tax or estate duty, and
no corporation tax.

There is technically still income tax assessed in the British Virgin Islands for companies and individuals, but the rate of taxation has been set at zero.[2] However, individuals are subject to a payroll deduction made of up to 8% for employees with 12% paid by employers, in relation to all salaries over US$10,000 per annum.

The absence of most major forms of taxation in the Territory has led to the country being included on most recognised lists of tax havens,[3] although the jurisdiction prefers to style itself as a modern offshore financial centre.

There are a number of forms of taxation and revenue collection in the British Virgin Islands, but the majority of the Government's revenues are obtained directly from annual licence fees for offshore companies incorporated in the jurisdiction.

The United Arab Emirates is a federation of seven emirates, with autonomous emirate and local governments. UAE does not have any enforced federal income tax legislation for general business. An income tax decree has been enacted by each Emirate, but in practice, the enforcement of these decrees is restricted to foreign banks and to oil companies.


[We don't know how big the businesses of these technology corporations in Thailand; how much they are growing; how much taxes Thailand is losing out by not paying attention to their tax minimization schemes; and perhaps instead of increasing taxes on people, Thailand should try to collect fair proportion taxes from mega-corporations -- too.] 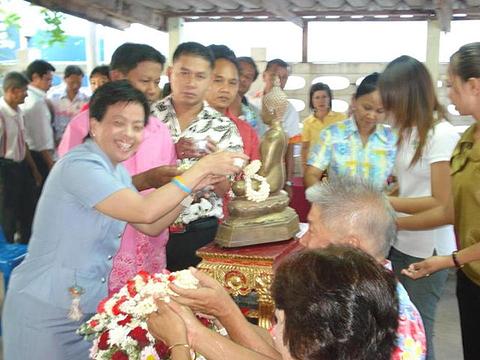 .......instead of increasing taxes on people, Thailand should try to collect fair proportion taxes from mega-corporations -- too.....ใช่เลยค่ะ

I understand your tax problems Dr. Ple and GD :

The drive for more government revenue comes from corruption, economic slow-down and inability to collect taxes from many sources. I think the current government can't rely on recovering money from corruption; can't find a solution to increase GDP; and it is much easier to collect taxes from middle-income people than trying to squeeze more juices from mega-businesses. So, the government look for every nook and corner (among the people ways of life), we can predict more complex tax laws describing more types of taxes (and more exemptions for some).

I don't have data on 'captital gain tax' on sales of properties in Thailand. (In Aus, any 'profit' after reasonable cost-of-sale made from sales of houses --bought or built-- are taxed at about 30% rate.)

I think the article on 'personal income tax' by Thai Publica is quite informative.

We can try pointing to 'sources of tax revenue' and hope the government see that these sources are worth more than unpopular taxws on people who will vote in the next election.