Not only of the millions now in bondage, but of unborn millions to come. 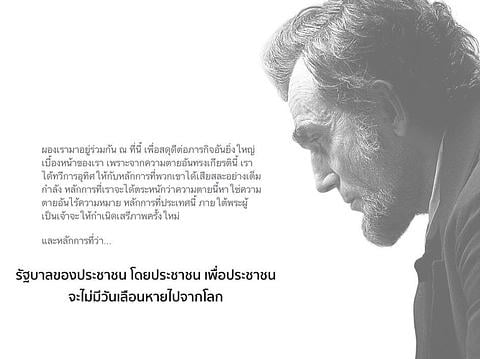 "Not only of the millions now in bondage, but of unborn millions to come."

This is a good movie, albeit seems too serious for most viewers and there is no war scene. (We can see in Gettysburg.) But I think this movie gives a good story to enable us to understand that sometimes to achieve the good outcome, bad tactics may be equipped. (This is politics, and it's a human affair, albeit what is the best principle is debatable, and I'll not mention here)

In the movie, we will see how Lincoln could move the congress to support an amendment of the constitution, and also to end the civil war in the same time. Hence, he could reunite the US and safeguard equality among citizens regardless either color or ethnics.

This is one of a few US president who can change the course of the history. It's the most privilege to be engraved on the history. But such prestige needs the cost of the president's life.
====

"Fondly do we hope, fervently do we pray, that this mighty scourge of war may speedily pass away. Yet, if God wills that it continue until all the wealth piled by the bondsman's two hundred and fifty years of unrequited toil shall be sunk, and until every drop of blood drawn with the lash shall be paid by another drawn with the sword, as was said three thousand years ago, so still it must be said "the judgments of the Lord are true and righteous altogether." With malice toward none, with charity for all, with firmness in the right as God gives us to see the right, let us strive on to finish the work we are in, to bind up the nation's wounds, to care for him who shall have borne the battle and for his widow and his orphan, to do all which may achieve and cherish a just and lasting peace among ourselves and with all nations."

For every dream; for every belief; for ever freedom; there are those who unite us all.

The film focuses on the last four months of Lincoln’s life, during which he is faced with a complex set of challenges. The civil war is coming to an end, perhaps too soon for the president, who is played brilliantly by Daniel Day-Lewis. Lincoln implores the House of Representatives to speed through a constitutional amendment banning slavery, lest a defeated South revert to its old ways. But the legislation is doomed unless he can hold together an unwieldy coalition of his own Republicans, and win over a recalcitrant group of Democrats.