Hardin Construction one of 3 firms cited in Botanical Garden mishap

Atlanta-based Hardin Construction was back in the hot seat Monday with the caving of a Midtown garage, just days after being fined for the December collapse of a bridge at the Atlanta Botanical Garden that killed one person and injured 18.

Hardin was the builder of the Centergy parking garage that collapsed Monday at Technology Square, a sprawling campus of offices, shops and a conference center in Midtown.

Cars sit in a jumble on the bottom floors of the Centergy parking deck at Abercrombie Place and Spring Street.

Police said an initial search of the property found no injuries, but officials planned to make another sweep this evening.

Hardin spokeswoman Barkley Russell, in an e-mailed statement, said the company was the construction manager on the entire Centergy project.

She directed reporters to Metromont Corporation, which she said designed, fabricated and erected the garage. Metromont was “chosen because of their expertise in precast/prestressed concrete building systems,” she said.

“To put this incident in perspective there are 1,415 spaces in this deck,” Russell said. “One section was involved, and it is estimated that approximately 35 spaces were affected.

“We are just thankful at this point there are no reports of injuries,” she said.

Hardin was one of three companies fined $26,250 in the Botanical Garden bridge collapse. Hardin was fined $6,300 for fault with four towers designed to support the walkway.

Hardin officials have said they plan to appeal the fines.

City officials said Monday the parking deck did not have any violations recorded by the city’s Bureau of Buildings and had not been examined since its original inspections in 2001 and 2002.

“The parking deck had no history of code complaints,” said Catherine Woodling, a spokeswoman for Mayor Shirley Franklin.

According to building permits, the structure is owned by Atlantic Capital Properties and the architect was Atlanta-based Smallwood Reynolds Stewart.

The garage cost an estimated $17.2 million to build, according to documents.

A building permit was issued for the deck in December 2001 and a revised permit issued in August 2002 for its entrance, Woodling said. Inspections were done both times and no problems were found.

“No further inspections are usually done on properties after they have been issued a certificate of occupancy,” said Woodling, who added this is common practice for the city.

She said only a complaint would have brought out inspectors.

Georgia Tech spokesman Matt Nagel said about 135 spaces are leased to the college’s employees, though the garage is not on Tech’s campus. The school on Monday advised employees who park there “that alternate transportation will be needed until city inspectors declare that it will be safe to remove their vehicles.”

In the weekend’s bizarrest news, a nearly finished, newly constructed building in Shanghai toppled over, killing one worker. As can be seen in the photo below, the 13-story apartment building collapsed with just enough room to escape what would have been a far more destructive domino effect involving other structures in the 11-building complex. 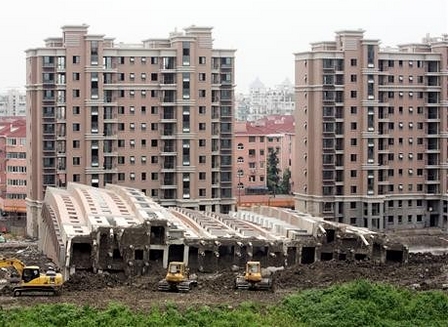 The development, known as “Lotus Riverside,” has a total of 629 units, 489 of which have already been sold. Now buyers are clamoring to get their money back, and authorities are making efforts to reassure them. The assets of the project’s developer, Shanghai Meidu Property Development Co., have been frozen and the city officials said the developer’s ability to repay homebuyers was secure, according to a statement on the municipal government’s Web site (in Chinese). A hotline has been set up for Lotus Riverside buyers, and by Sunday afternoon, more than half of them had met with a group of lawyers and officials organized to help them negotiate with the developer, according to the statement.

Meanwhile, the cause of the accident is under investigation and nine unidentified people from the developer, contractor and management company have been detained.

A representative of Shanghai Meidu could not be reached for comment.

The disaster could reveal some uncomfortable facts about lax construction practices in China, where buildings are put up in a hurry by largely unskilled migrant workers, and developers may be tempted to take shortcuts.

According to Shanghai Daily, initial investigations attribute the accident to the excavations for the construction of a garage under the collapsed building. Large quantities of earth were removed and dumped in a landfill next to a nearby creek; the weight of the earth caused the river bank to collapse, which, in turn, allowed water to seep into the ground, creating a muddy foundation for the building that toppled.

The South China Morning Post noted that the pilings used in the Lotus Riverside development, made of prestressed, precast concrete piles, are outlawed in Hong Kong because they aren’t strong enough to support the kind of ultra-high buildings that are common in Hong Kong. But in mainland China, they are often used because buildings there are typically much shorter (subscription required).

Quality problems have long plagued construction in China, though they seem to be more apparent in rural areas and smaller cities, not in major metropolises such as Shanghai and Beijing. When school buildings were flattened by last year’s massive Sichuan earthquake, a number of parents faulted shoddy construction for creating “tofu buildings” that fell while other nearby structures were able to withstand the impact of the quake. More recently, state media reported that several new dams along the Yellow River are in danger of collapse, a situation attributed to shoddy construction practices, embezzlement and unqualified workers.

Soil conditions investigated as cause of Shanghai apartment building collapse

A nearly finished 13-story apartment building in Shanghai toppled over because of piles of dirt that were excavated to build an underground parking garage, according to initial investigation results, experts say.

City officials vowed to pursue responsibility for the June 27 disaster, which killed one person and cast doubt on the safety of the scores of other projects under way in this city of 20 million. But they admit they were perplexed over how the building could have toppled over almost intact.

“When we arrived on the scene, we were very shook up. In my 46 years of work, I’ve never seen or heard of such a thing,” said Jiang Huancheng, a prominent local engineer and professor at Shanghai’s Tongji University.

The accident was an embarrassment for Shanghai, a showcase city of 20 million in the midst of a construction boom as it prepares to host the 2010 World Expo.

Jiang and other officials told reporters their study showed the suburban building’s design and construction conformed with safety regulations and that more analysis is needed to pinpoint the reason why it fell over almost intact.

There are differing opinions among the experts, but the main conclusion is that the cause is a tall pile of dirt next to the building, they said.

“It’s clear that if there had been no pile of dirt, there would have been no problem,” said Fan Qingguo, an engineer with state-run Shanghai Construction Group.

Other experts explained that dirt excavated for the garage may have compacted the soil, causing it to shift and damage the building’s foundations so that it fell over. Heavy rains and cracks in a flood wall for a nearby river also suggest problems with the soil on the site, they said.

Unusually aggressive reports by the state-controlled media have centred on possible collusion between the property developer, the contractor and others supervising the work. Earlier this week, the government said nine people were “under supervision” in connection with the investigation.

Officials in Shanghai’s Minhang district, the location of the “Lotus Riverside” apartment compound where the building fell, will release results of their investigation into responsibility for the disaster later, said city government spokesman Chen Qiwei.

“We absolutely must give society and the people a clear answer,” said Xie Liming, head of Shanghai’s Work Safety Administration.