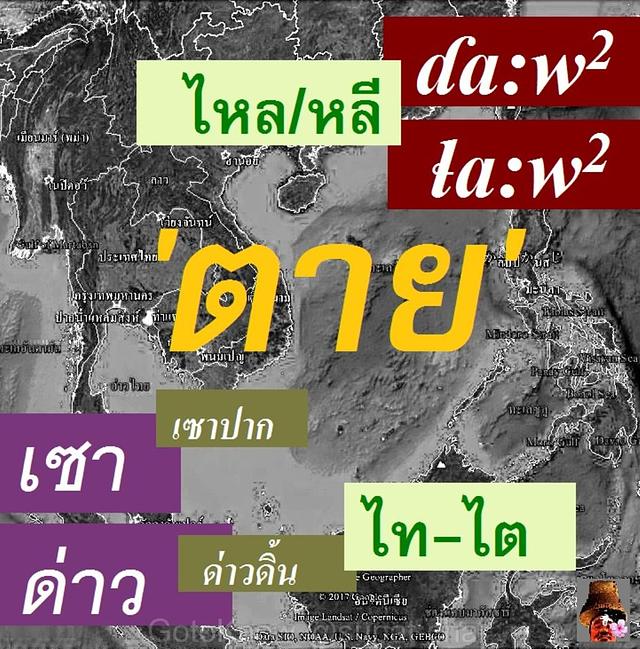 The word for ‘to die’ has been widely attested in the historical and comparative linguistics studies of Austronesian and Tai-Kadai for a long time. The proto-forms have been reconstructed as Proto-Austronesian *m-aCay, Proto-Tai *p.ta:jA and Proto-Kam-Sui *pjai1 (Austronesian Basic Vocabulary Database by Greenhill, S.J., Blust. R, and Gray, R.D. 2008). Except, Kra and Hlai have used the different words, instead with unknown source and without clear explanation provided so far. In the connection to this puzzle, it is the main purpose of the present paper in order to trying to answer the question but only the Hlai with very much appreciated to Peter Norquest on his study of A Phonological Reconstruction of Proto-Hlai 2007.

The present study has been conducted by determining the subsurface etyma of Indonesian disyllabic correspondence set, in this case called ‘monosyllabic root’ and then followed by the cross correlation between Austronesian and Tai-Kadai which may be different from the mainstream works. The term ‘subsurface etyma’ might sound strange in the linguistics field because whenever the term ‘etymon’ is applied it should mean that there is no any further unknown root remained. However, in Austronesian languages, there still be many core correspondences that have not fully been investigated, even though, in the past 15-30 years, many scholars, such as Robert A. Blust, R. David Zorc, John U. Wolff, E.M. Kempler Cohen, etc. have identified the vast area of monosyllabic roots. In Tai-Kadai, the sound-meaning correlated words have been recognized by some scholars since 1963 and lately by Navavan Bandhumedha in 2012, however, the monosyllabic root has never been identified before because the difficulty is that how can we isolate the monosyllabic root from the monosyllabic and sesquisyllabic languages.

The first correspondence is that Baoting has used ɬa:w2 in 3 words; ‘to die’, ‘spade’ and ‘take off’.

The third correspondence is that word for ‘spade’ and ‘take off’ have the same proto-form as Proto-Hlai *lja:wɦ and Pre-Hlai *Cila:wɦ of which are not far from the proto-form of words for ‘to die’ and ‘squirt’.

The forth correspondence, the most important one, is that words for ‘squirt’, ‘spade’ and ‘take off’ are considered as the subset of *raw, another cross-correlated monosyllabic root of Austronesian and Tai-Kadai. It has the main fundamental sense of ‘to scratch, carve and outline’ and it is paired with *law, one of the cross-correlated monosyllabic root who acts as male with the fundamental sense of ‘all gathered, mixed up and oldest source’.

In Tai-Kadai, this root is clearly identified in the area of Tai and Hlai and could be separated into two classes based on the step of working as follows:

เสลา – slawA1             ‘to carve’ (Siamese word; automatically, it means to the sleek and carve processes of any material until finish and is always used with a word for ‘sculpture’ สลัก – slakD1, a subset of cross-correlated monosyllabic root *lak who has the fundamental sense of ‘male trait’)

เพลา – phlawA2           ‘shaft’ (Siamese word; it is represent the long tube-shaped that has been done through the same process as others)

เหลา – lawA1               ‘to sharpen, to chamfer’ (it is another universal word in Siamese that applies to sleeking work on a stalk, such as bamboo and rattan and followed by making a shape)

สาว – sa:wA1              ‘to pull and to strip’ (in Siamese, even though it uses the same pronunciation with word for ‘bride’, it has a different sense and comes from a distinct root; the Hlai word for ‘to strip’ is divided into two classes; the first one, such as Bouhin, Ha Em, Lauhut, Moyfaw and Baisha row1, Tongzha row4 , Zandui low4, Baoting (law5) and Proto-Hlai *ɾu: and Pre-Hlai *C-ɾu: and the second one, such as Ha Em and Lauhut law3, Baisha rɯ1, Yuanmen rɯ4 and Proto-Hlai *C-lu:ʔ; ‘to pull and to strip’ is the meaning that falls under the same process with ‘to scratch and to carve’)


2.‘to make pattern, shape and structure’:

คร่าว – khra:wB2         ‘outline and frame’ (in Siamese, it has two applications, one is used as a kind of cross bar structure, in particular, for the house wall and another is used as a rough boundary or rough structure or rough estimation which is similar to ราว – ra:wA2 ‘about and bar’)


In Austronesian, *raw can be identified in many disyllabic correspondence words in Indonesian. The examples are presented with its pair word from *law, if available, as follows:

The examples given above have strongly expressed the fundamental sense of root *raw as ‘to scratch, to sleek and to make something’ of which points to the same root with Tai-Kadai. However, it could well be isolated from root *law, not like in Tai-Kadai who had been believed to shift the *r-sound to *l-sound in many words. The shifting between *r-sound and *l-sound in Tai-Kadai seems to be very obvious; the vast samples can be identified but do require help from the monosyllabic root of *l-initial and *r-initial who are a forebear pair. The distinction between *l-initial and *r-initial roots could, at least, be extracted from the correspondence set in Indonesian languages who have well preserved the disyllabic form as well as distinct sound and meaning. Then, the sub-grouping of *l-initial and *r-initial roots in Tai-Kadai should rather set the priority to its base meaning than l-sound or r-sound.

Furthermore, the root *raw does not only present in Indonesian, it has even embedded in the other Austronesian, in particular, word for ‘to scratch’. Many groups of Formosan have used word for ‘to scartch’, such as:


Many groups of Malayo-Polynesian have also used this word in the similar sound and meaning as follow:

Interestingly, the Proto-Malayo-Polynesian and Proto-Austronesian have been reconstructed as disyllable *kaʀaw. The form, even though the medial is *ʀ, as well as the meaning of this proto-form have highly corresponded with *raw and it is also can be correlated with Tai-Kadai เกลา – klawA1 ‘to polish, to clear, to smooth, to scrape’ and เกา – kawA1 ‘to scratch’. Therefore, it should not be overstatement that word for ‘to scratch’ *kaʀaw is a part of cross-correlated monosyllabic root *raw.

It has come to the conclusion between the line that *raw has long been existed in the Austronesian and Tai-Kadai as a cross-correlated monosyllabic root. It has the general sense of ‘making the product from the long tube-shaped material by the process of scratching, abrasive, scraping, craving, sleeking, sharpening, cleaning, washing, weaving and making a pattern’. Thus, needless to say that the Hlai words for ‘squirt’, ‘spade’ and ‘take off’ are a part of the root *raw. Apart, the present paper is one of the good samples for applying the term ‘subsurface etyma’ to the studies of these two phylums.

Moreover, it is one of the good indications which reflects the living style of people in the ancient time. Those were the forebear people who had the knowledge in producing the final product material from the raw material, such as bamboo and rattan through the process of scratching, carving and making structure. The final product could be ranged from the small cultural material until the large living structure. Upon the dispersed time, the root *raw with its knowledge was carefully carried on the back and shoulders of the immigrants to the new settlements and has been inherited from generation to generation until the present.

The fifth correspondence is that by nature, the dead body of any life could be identified by a simple practice, such as no breath taking in and out, motionless, stiff and lay down such like a dead wood. Hence, the dead body is very similar to a spade handle or a spear or a bamboo stalk of which is exactly pointed to the Hlai word for ‘to die’ ɬa:w2 and ɗa:w2 with Proto-Hlai *hla:wɦ and Pre-Hlai *la:wɦ.

The last correspondence is quite surprised because it is found that the Hlai word for ‘to die’ has well been preserved in Siamese and Lao in the words for ‘to stay still’ เซ่า – sawB2, ‘inactive or stagnant’ เซา – sawA2 and ‘to die’ ด่าว – da:wB1, for example:

Based on 6 correspondences as demonstrated in above, the conclusion is that the Hlai word for ‘to die’ could be correlated with much confident to the Austronesian and Tai-Kadai words for ‘to scratch’ through the cross-correlated monosyllabic root *raw under the fundamental sense of ‘to scratch, to carving and to make shape’. It is one of the ancient roots, supposed to exist since a time much earlier than the forming of Austronesian and Tai-Kadai; perhaps, earlier than the forming of the first generation disyllabic word. Therefore, the Hlai word for ‘to die’ is somehow nothing else, just a long naked and dried wood.

So 'to die' is 'to become stiff like a piece of dead wood'?

My ipa code reading is quite limited and I have problems working out the tones of words (in ipa code), I would appreciate a brief explanation on how to pronouce those words ;-)