CVCC can also be used to represent a consonant-vowel-consonant-consonant syllable pattern. 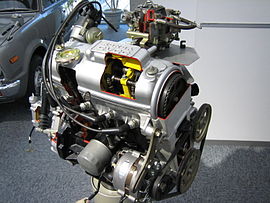 A CVCC engine for Honda Civic

CVCC is a trademark by the Honda Motor Company for an engine with reduced automotive emissions, which stood for "Compound Vortex Controlled Combustion"

technology was done by Mr. Soichiro Honda February 12, 1971, at the Federation of Economic Organizations Hall in Otemachi, Chiyoda-ku, Tokyo.[2] Honda's engineers at the time, Mr. Date conferred with Mr. Yagi and Mr. Nakagawa about the possibility of creating lean combustion via a prechamber, which some diesel engines utilized.[3] The first engine to be installed with the CVCC approach for testing was the single-cylinder, 300 ccHonda EA engine used in the Honda N600 hatchback in January 1970.[3] This technology allowed Honda's cars to meet Japanese and United States emission standards in the 1970s without a catalytic converter. A type of stratified charge engine, it first appeared on the 1975 ED1 engine. As emission laws advanced and required more stringent admissible levels, Honda abandoned the CVCC method and introduced PGM-FI, or Programmed Fuel Injection on all Honda vehicles. Some vehicles in Japan had a combination of electronically controlled carburetors, called PGM-Carb on specific, transitional Honda D, E and ZC engines.

Toyota briefly used a similar technology in the mid-to-late seventies, called TTC-V. In 2007, the Honda CVCC technology was added to the Mechanical Engineering Heritage of Japan.

Honda CVCC engines have normal inlet and exhaust valves, plus a small auxiliary inlet valve which provides a relatively rich air–fuel mixture to a volume near the spark plug. The remaining air–fuel charge, drawn into the cylinder through the main inlet valve, is leaner than normal. The volume near the spark plug is contained by a small perforated metal plate. Upon ignition flame fronts emerge from the perforations and ignite the remainder of the air–fuel charge. The remaining engine cycle is as per a standard four-stroke engine.

This combination of a rich mixture near the spark plug, and a lean mixture in the cylinder allowed stable running, yet complete combustion of fuel, thus reducing CO (carbon monoxide) and hydrocarbon emissions. This method allowed the engine to burn less fuel more efficiently without the use of an exhaust gas recirculation valve or a catalytic converter, although those methods were installed later to further improve emission reduction.

Honda's big advancement with CVCC was that they were able to use carburetors and they did not rely on intake swirl. Previous versions of stratified charge engines needed costly fuel injection systems. Additionally, previous engines tried to increase the velocity and swirl of the intake charge in keeping the rich and lean mixtures separated. Honda was able to keep the charges adequately separated by combustion chamber shape.

Some of the early CVCC engines had a problem with the auxiliary valves retaining collars vibrating loose. Once unscrewed, engine oil would leak from the valvetrain into the pre-combustion chamber, causing a sudden loss of power and massive amounts of smoke to emanate from the exhaust pipe. The condition simulated a blown engine, even though the needed repair was quite simple. Honda eventually came up with a fix involving metal retaining rings that slipped over the collars and prevented them from backing out of their threads.

The 1983 Honda Prelude (the first year of the second generation of Preludes) used a CVCC design and a catalytic converter to reduce emissions, called CVCC-II, along with 2 separate sidedraft carburettors (instead of a single progressive twin choke carburettor). The following year a standard cylinder head design was used and the center carburettor (providing the rich mixture) was dropped. The Honda City AA, introduced in November 1981, also used a CVCC-II engine called the ER.[4]

The long-stroke, 12-valve CVCC-II for Japan and 8-valve for Europe and Asia ER four-cylinder engine was only used in the AA/VF/FA series City/Jazz (1981–86).[4][6] It was available as a normally aspirated carburated version or with Honda's own PGM-FI fuel injection as one of a very few turbocharged engines built by Honda. The Japanese market CVCC engine was also known as COMBAX, an acronym of COMpact Blazing-combustion AXiom. The E-series were tuned for economy, with higher gearing and later on with computer controlled variable lean burn. As of March 1985, the naturally aspirated ER engines gained composite conrods (a world first in a production car), lighter and stronger these helped further reduce fuel consumption.

The lower powered engines in the commercial "Pro" series had a lower compression, a mechanically timed ignition rather than the breakerless setup found in the passenger cars, and a manual choke. The ER had five crankshaft bearings and the overhead camshaft was driven by a cogged belt.

Carburetor versions used either a single or 2bbl downdraft Keihin. The turbocharger in the Turbo and Turbo II was developed together with IHI, the Turbo II being equipped with an intercooler and a computer controlled wastegate.[4]