Sekigahara and the political decisive moment

A well comparative approach on politics, abbreviated as "bird" for the three unifiers of Japan:

The legend, however, of the archrival of Tokugawa Ieyasu who would be defeated at the final phase of Sengoku period paving to the Edo era, Ishida Mitsunari is different as follow:

Once upon a time, Hideyoshi who became important of the Nagahama Castle did falconry in possessing it.
Hideyoshi learned the return, the dehydration of the throat and he dropped in at a certain temple and required tea.
First the page in a temple who dealt made rather lukewarm tea for one serving from green powder in a large bowl and took it out.

The page looked at the state of the person and started it in the state that the person wanted. That page is Mitsunari.

Actually, Mitsunari's army, "the west" had almost crushed Tokugawa's "the east" at Sekigahara. The "turning point" is at Kobayakawa Hideaki at mount Matsuo. As we know it, Kobayakawa had defected and attacked Ōtani Yoshitsugu at the Mitsunari's right wing, led to the collapse of "the west". Literally, Kobayakawa was a very complicated character. The movie has laid the floor very well. The politics to pursue alliance had happened long before the departure of Hideyoshi.

Mitsunari had reflected a "strict" principle and very idealistic character as of his emblem "大一大万大吉" ("Dai Ichi, Dai Man, Dai Kaichi" or "One for all and all for one and Heaven bless the land."), an application of Confucius' principle to create justice state to stop chaotic world, as of his teaching during "The Spring and Autumn period" in China. 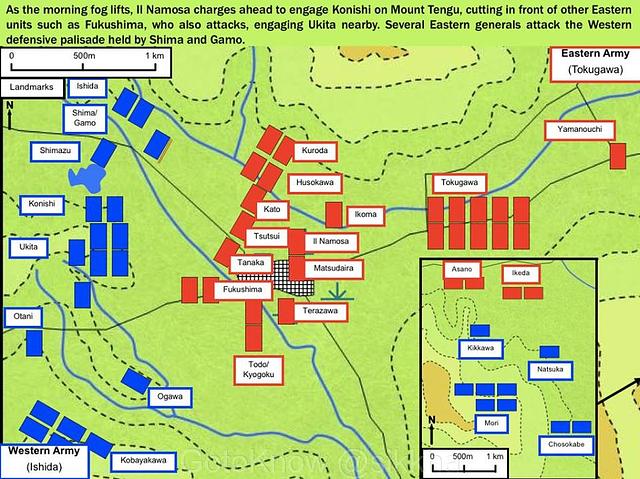 This strict principle is a double-edge sword, it can draw some great people like Shima Sakon and Ōtani Yoshitsugu, but it also made a plight-pressure to some people either. (I feel that in the movie, Ōtani Yoshitsugu is too much similar to Uesugi Kenshin, while the real Ōtani is much more younger. He was the same age as Mitsunari, and used to be sent to Korea as one of the Three Bureaucrats with Mashita Nagamori and also Mitsunari.)

Politics isn't measured by only principle (noumenal realm), but also by how much you can pursue "powerful" alliances or numbers of followers (phenomenal realm).

On the contrary, Tokugawa presented more "flexible" and "pragmatic" approach to Kobayakawa, whereas in the same time applied a hostage tactics to control Kobayakawa and even provided a samurai from Yagyū clan, Goro as a personal guard but to behead Kobayakawa in case that he didn't follow Tokugawa's command. Later, after the war, Kobayakawa had felt so sorrow on his "wrong doing" and "died two years later after supposedly going mad, and with no one to succeed him, the Kobayakawa clan disbanded, and his fiefdoms were absorbed by the neighboring Ikeda clan."

Had Kobayakawa not defect, and instead joined Ōtani to attack Tokugawa, both Mori and Chosokobe would attacked Tokugawa at the rear, and Japan's history would be very different. Tokugawa's "gamble" on not attack to Kobayakawa was very successful, paying precious payoff. Politics is always a result of a great gamble.

The movie is very good, can compare to or even surpass Akira Kurosawa's Ran. It can strike ¥2.4 billion in box office. It has rendered the history to become into being and displays an interesting people's daily life, politics and war such as a career of Shinobi and Ninja, and how they helped shaping the terrain of the fog of war. An adopting of technology such as firearm and cannon which dictated the war is also very important (which contrasted to the misunderstanding of "The Last Samurai", Japan has used firearm and cannon long before "Meiji Restoration" as in "The Last Samurai").

The movie's soundtrack by Harumi Fuuki is very interesting. You can listen to some of it in the video clip and Apple music's sample here. When the main theme song has been decorated in some scene, it really made me tremble. I've found this movie by accident, it's really a rare missing gem. I feel that this movie has represented something strange, a qualitative radical transformation of Japan, noted it to not to forget. To my surprised, some Thai production house joins the name in the end credit of the movie.