When making the speech, make sure that everyone heard you, the media reported your idea ,and some big guys referred to your opinion. That reflects your influence over public policy. However, delivering the message is not the same thing that you'll expect it from the real-politik that might happen in the future.

Using keyword "China" on "unclassified" Hillary Clinton's e-mails. Here's how the US state department tracks the message. It's very interesting!

You can reach to the "virtual reading room" on Hillary's e-mails here: https://foia.state.gov/Search/Results.aspx…

There is an email regarding the response between MM Lee Kuan Yew over Hillary Clinton's speech on the South China Sea. Here's how e-mail goes: 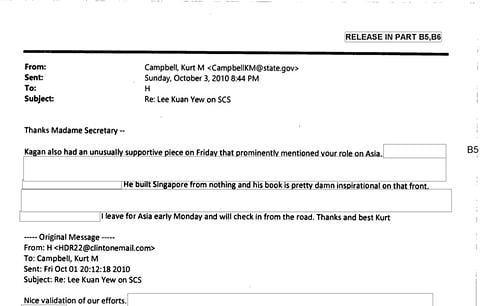 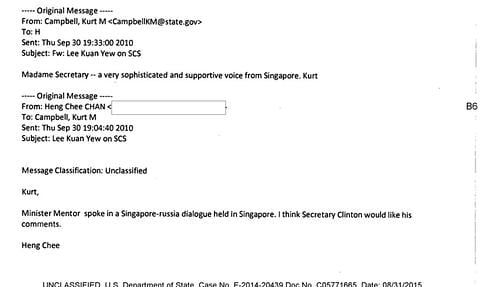 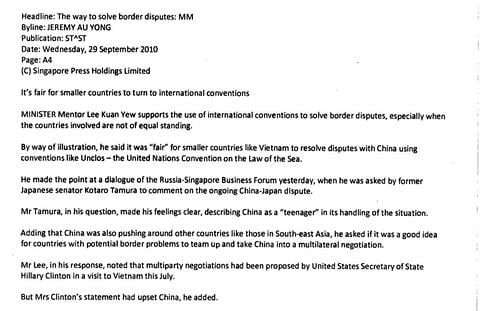 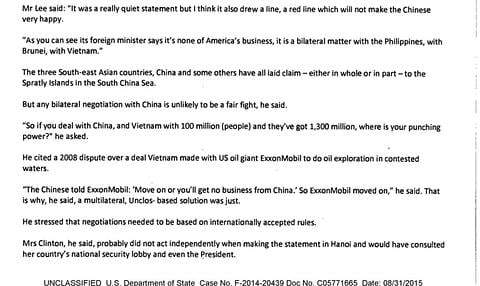 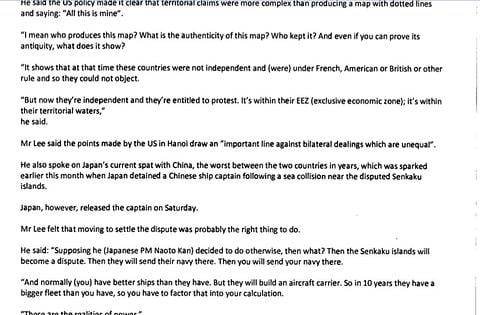 The e-mail had started with Chan Heng Chee, the ambassador of Singapore to the US, she had forwarded the report in the Strait Times on the opinion of MM Lee regarding Hillary Clinton's speech on the South China Sea to Kurt Campbell. (You can read the speech here.)

The United States supports a collaborative diplomatic process by all claimants for resolving the various territorial disputes without coercion. We oppose the use or threat of force by any claimant. While the United States does not take sides on the competing territorial disputes over land features in the South China Sea, we believe claimants should pursue their territorial claims and accompanying rights to maritime space in accordance with the UN convention on the law of the sea. Consistent with customary international law, legitimate claims to maritime space in the South China Sea should be derived solely from legitimate claims to land features.

The U.S. supports the 2002 ASEAN-China declaration on the conduct of parties in the South China Sea. We encourage the parties to reach agreement on a full code of conduct. The U.S. is prepared to facilitate initiatives and confidence building measures consistent with the declaration. Because it is in the interest of all claimants and the broader international community for unimpeded commerce to proceed under lawful conditions. Respect for the interests of the international community and responsible efforts to address these unresolved claims and help create the conditions for resolution of the disputes and a lowering of regional tensions. Let me add one more point with respect to the Law of the Sea Convention. It has strong bipartisan support in the United States, and one of our diplomatic priorities over the course of the next year is to secure its ratification in the Senate.

Once got the email from Amb Chan, he forwarded this email to Hillary with this message: "Madame Secretary — a very sophisticated and supportive voice from Singapore. Kurt."

Hillary then replied with message "Nice validation of our efforts. [——censored——]"

The then American diplomacy might want to perform a warning message over China's role in South East Asia without any escalation of the conflict between the US and China, a message sending by Hillary's speech may reflect this. The printing on the Strait Times regarding MM Lee opinion confirm the same message that the US would want everyone to here. And thus, that's why Hillary said it's a validation of "their" efforts.

Kurt then replied with this message again : "Thanks Madame Secretary — Kagan also had an unusually supportive piece on Friday that prominently mentioned your role on Asia. [——censored——] He built Singapore from nothing and his book is pretty damn inspirational on that front. [—— censored —— ] I leave for Asia early Monday and will check in from the road. Thanks and best Kurt"

It seemed Hillary's speech had been the center of the American diplomacy toward China. And that's why Kurt mentioned Kagan on talking on Hillary's prominent role on Asia.

It's interesting that Asian Journal of Public Affairs (AJPA) from Lee Kuan Yew Scholl of Public Policy, NUS has mentioned the exact MM Lee's quote in their journal. You can read the journal here, the article referred to MM Lee's opinion on Hillary's speech on the footnote is here. 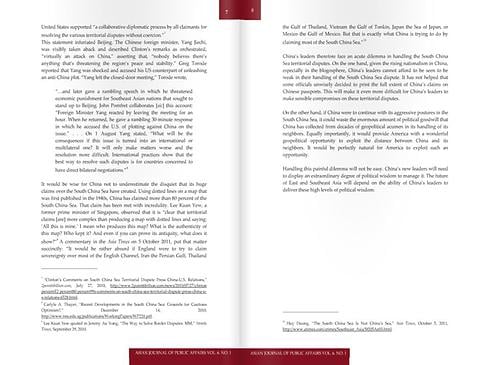 Observing through this journal together with the e-mail from Amb Chan, I'm helplessly start to not sure that it's an intention of Singapore or the US on this kind of diplomacy?

And if we think about the recent movement of China in the South China Sea on building the artificial island that equipped with the airport that can carry the bombers. And the recent more aggressive stance from the US on the CFR report, Revising U.S. Grand Strategy Toward China, it seems the American diplomacy on warning China to halt her activity on the South China Sea was not effective enough although everyone heard the message Hillary wanted to convey.